To prepare for my trip to New Zealand I watched the movie The Hobbit. Honestly, I didn’t see much of the landscapes watching it. I was mostly interested in the story and how the movie was translated to film. I should have focused on the landscapes, because in those surroundings I would have found myself a few days later. 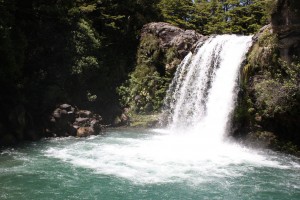 I read in the media that when the first part of The Hobbit came out New Zealand was hobbit-minded. According to locals it really wasn’t that bad, but it was good promotion for the film. Still, you couldn’t avoid all hobbit stuff when you were there.

It starts with the journey there. In the airplanes of Air New Zealand they showed an emergency instruction video. Only this one the instructions came from a wizard, elves, dwarves and hobbits. ‘Welcome to Middle Earth’. On the long flight from Amsterdam to Auckland you could watch all kind of films and series about the Hobbits, found under the section Hobbit Tales.

In ‘Middle Earth’ you could go on several trips to film locations or travel there yourself with a special travel guide. There were a few (expensive) tours to Matamata, christened Hobbitton, where you can take a picture in front of Bilbo’s house or drink a beer at the inn The Prancing Pony (all from the films).

Of course New Zealand wants to earn money of the six films made about hobbits. It happens everywhere. I wouldn’t of course participate in those kinds of businesses, too commercial. I only visit a beautiful waterfall and it is definitely not because it was the waterfall where Gollum catches fish in a fishing hole in one of the movies. Or was it?